This blog, by Ben Smith, is a good example of how some businesses are still using the ‘listed building’ tag as an excuse to avoid simple adaptations which would mean that disabled people can enjoy “lively concerts”. When places like the House of Commons can make changes then surely others can. AccessAdvisr calls on the Pavilion Bournemouth to work with disabled people and implement a practical solution.

Going to a concert should be a simple and enjoyable event. Venues have made accessibility a part of their offering, but it’s not always the case. The Pavilion in Bournemouth proving it hasn’t quite made the changes seen in some venues.

First of all, my excuses. This was a gig for OMD which is about as middle of the road and ‘safe’ as you can expect for me. I grew up on somewhat more 'alternative' music – this was a very sensible gig for me, so don’t shoot me down. As a very young boy, OMD was the very first album I bought. Across my very broad spectrum of musical tastes they still just fit in. I’m used to gigs where large parts of the crowd are dancing, jumping, and the rest. But I’ve always been able to see and experience the event now that I use a wheelchair. So OMD really shouldn't be the band to cause a problem.

I’ve been to the Pavilion for events before, but these have all been comedy. This was the first music event. It’s not really a surprise that at a music event everyone stands up. I don’t think I’ve ever been to a gig where everyone doesn’t stand, so stupidly I assumed they could handle the rock n roll antics of an 80s electro group… To say the placement of the wheelchair spaces at the back of a block of seats is a bad idea is an understatement. No raised area, just placed behind row F. All of the seats are fixed seats, so without any raised area, or thought to place accessible viewing at the front of seating you can guess what happened. As soon as they kicked off, I got a lovely view of the backsides of everyone in the row in front jiggling around. We moved to the end of the row, but the aisle was blocked by people dancing. Fortunately two people in front of us realised and moved so I could see something (much respect - pic attached when we got a gap to see through). Occasionally I saw some of the light show and a head or two, but mainly the evening was watching people’s backsides, and it’s interesting how the sound becomes muffled when you are basically tucked down below everyone else. 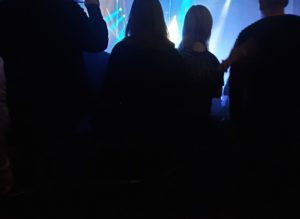 During this, no staff were available or visible. No staff came to check the accessible area when aisles were blocked. The venue failed to react. I was blocked in to the side, and behind. I’m sure I could have got out if had to via shoving and running over some feet, but there was no way out or staff visible.

I am going to make a guess that anyone who goes to a venue with any range of accessibility needs has been let down at some point. This for me, was probably not the worst experience I have had when going out, as some sports venues, restaurants are far worse - but did make me wonder – are some big venues just giving up on accessibility? The Pavilion in Bournemouth seems to have gone through a tick box exercise which is probably fine for any standard event (to a limit), but totally inadequate for any music event. Rather than just jumping on social media, I emailed after the event. The reaction was something to behold.

According to the venue the issue is the fault of the band for encouraging the audience to stand. "Artists will inevitably encourage the audience to stand up and dance in an attempt to create a good atmosphere in the Auditorium." Not the fact the venue hasn’t adequate accessible viewing areas or staffing, nor have they warned guests with accessibility requirements of the poor facilities for a music event. It is of course an old listed building, it is not easy, but there are many options that could be looked into. Unfortunately, well over 1 month after the original complaint went in, the venue has failed to follow up after I asked to escalate to the General Manager, which probably underlines the lack of commitment to accessibility.

After almost 10 years of cutbacks, venues know they aren’t being policed on these issues rigidly. Are they just going through the motions? There are some excellent venues out there, but the poor venues can get away with it.

The facilities, communication and response from this venue has been poor in my opinion. I’m sure it isn’t an isolated incident, and maybe this will help The Pavilion kick into action. Anyway. I would like to commend other venues out there. Maybe using old theatres for music events requires much more thought when it comes to accessibility - but other venues can do it. At the least, talk, otherwise the best view we’ll get is from the end of the row - if we’re lucky.